If you need any help with algebra, calculus, online classes, courseworks, do my math homework statistics or any math related subject you can rely on us. Our professionals can help. Overnight delivery! 24/7 customer support!

Get a Free Quote

Integral calculus emerged when the scientists were searching how to compute the areas of surfaces, plane figures, solid body volumes, and addressed problems in hydrodynamics, statistics and other physics domains. An example of a problem that contributed to the development of integral calculus is finding the object’s law of motion along a line given that the velocity of this object is known.

Historically integral calculus evolved as a domain of mathematical analysis, which developed as a result of solving two key problems: finding the function by its derivative, and determining the area bounded by a certain graph or three-dimensional surface(s) at a certain interval(s). The first problem stimulated the evolution of the analytical meaning of an integral (indefinite integral), and the second problem gave birth to the concept of a definite integral.

Integrals are now widely used in different domains of research and computing. Integral calculus can be used to find the average value of a function within a given interval, to compute the areas between curves, to determine the volumes of rotating objects or regions, etc. In addition, integral calculus is widely applied in physics: it can be used to determine the amounts of work needed to move or rotate an object, to address kinematics problems, to study and model the motion and interaction of objects, to find center of mass, to assess the probability of certain events. Thus, understanding of integral calculus and the ability to work with different integral types is critically important in many domains.

. This equation reads as follows: the indefinite integral of

. This equation reads as follows: the definite integral of

from a to b with respect to

There are many types of definite integrals differing by the boundness of the integral sum (proper and improper integrals) and by the number of variables in the function (double, triple and multiple integrals). All types of integrals described above will be discussed in more details and with examples in the next sections.

The antiderivative is an important concept in integration. Antiderivative of a function gets back to the original function; in other words, if

is the derivative of a function

is an antiderivative for

. For example, the derivative of

is an antiderivative for

Precise definition of an antiderivative is the following: function

is an antiderivative of function

The indefinite integral of a given function

is written down as

, and the relationship between these functions is represented by the following equation:

describes the function that is being integrated (the integrand),

has an indefinite number of integrals which differ by the constant C. Indeed, since the derivative of a constant is 0, this means that integrating a function

and integrating a function

will yield the same result,

Example of calculating an indefinite integral:

. The result can be verified using derivatives:

. Indeed, the derivative of the function

, which proves that the calculation is correct.

One of the problems solved by integration is finding the area under the curve within a certain interval. To address this problem, the concept of Riemann sums was coined. Let us assume the goal is to determine the area under the function

bounded by the lines

. The figure below demonstrates the target area that should be calculated. 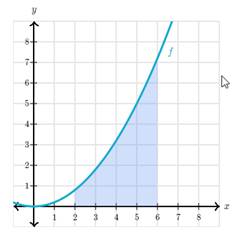 intervals of equal width, and computing the sum of rectangles, which intersect with the function as displayed on the figure below. 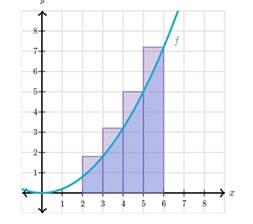 This approximation of the area can be written as:

. To get a more precise estimation of the area under the curve, it is reasonable to increase

, therefore reducing the size of intervals.

In the general form, this approximation of area under the curve is expressed using the following formula:

The value of definite integral can be computed using antiderivative:

, where https://essay.ws/wp-content/uploads/2019/05/fx.png is the antiderivative of

with constant C = 0.
Example: let us calculate the area under the curve

over the interval [2, 6]. This area is computed using the following definite integral:

The value of definite integral can be computed using antiderivative:

, where https://essay.ws/wp-content/uploads/2019/05/fx.png is the antiderivative of

with constant C = 0.
Example: let us calculate the area under the curve

over the interval [2, 6]. This area is computed using the following definite integral:

The definite integral is defined for a function

is continuous over this interval. If both of these assumptions are satisfied, such integral is referred to as proper integral, and is computed according to the definite integral rules:

In the previous section, the concept definite integral was based on two key assumptions: finiteness of the integration interval and the continuity of the integrated function over this interval. Such integrals are also called proper integrals. If either of these conditions is violated, then the integral is referred to as improper.

One example of an improper integral is the case when one of the integration limits is infinite:

. Another example of an improper integral is the case when the function has at least one infinite discontinuity over the interval:

becomes infinite when x approaches 0 from both sides).

Improper integral with the right side of the interval being infinite can be determined as:

An improper integral calculated on

is any convenient number where the function is defined and continuous. The same approach is used for integrals that contain discontinuities over the interval: the integral is represented as the sum of two integrals with the point of discontinuity separating the original integration interval into two intervals.
Example of calculating an improper integral:

The given improper integral converges to 1.

over a domain D bounded in an n-dimensional space. In the general form, such integrals can be written as:

A single definite integral is denoted as

Double integrals are computed sequentially: it is necessary to work out the limits of integration for x and y, then to perform integration for y variable (assuming x is constant), and to integrate the result for x variable. Assuming that

, the process of calculating a double integral is represented by the following equation:

Example of calculating a double integral:

, where R is a rectangle defined by the following boundaries:

This integral can be calculated as follows:

Triple integrals represent a concept similar to double integrals, but the area of integration in this case is not an area but rather a three-dimensional surface. A triple integral can be represented as

Triple integrals are also calculated sequentially, similarly to double integrals: the integration is performed by one dimension, assuming that other dimensions are constant, then by the second dimension, and finally by the third dimension. Example of calculating a triple integral:

, where E is defined by the following boundaries:

It can be written as:

How to use our online integral calculator